There’s a lot to get you into the holiday spirit in Rome and Italy during Christmas time. All throughout the country, the season spreads itself over more than just Christmas Day. So if you’re planning on visiting Rome during December or if you’re going to be around for the whole month (lucky you!) then read on to discover the Christmas traditions of Rome and Italy that happen from December to early January. 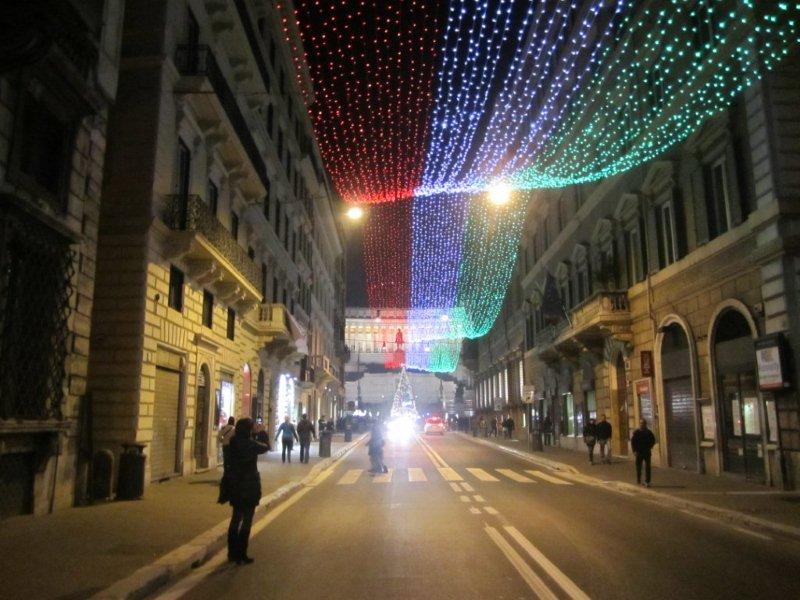 The Feast of the Immaculate Conception

The Italian Christmas season officially starts with Feast of the Immaculate Conception on December 8. In Rome, this is a good day to go Pope spotting, as Pope Francis will be making his way to Piazza di Spagna to honour the Virgin Mary. His destination is the Column of the Immaculate Conception, which jabs the sky from Piazza Mignanelli. The usual ceremony sees him blessing a wreath that gets laid around the column’s base. If you plan on going, get there early as the piazza rapidly fills up.

Also the Feast of the Immaculate Conception is when Rome’s Christmas lights get turned on. Elegant strands drape over streets, and colourful bulbs float like bubbles through the narrow gaps between the buildings. After sunset, the sparkling lights permeate the historic centre with a glowing coziness that lights the passing faces. Each year the lights are strung up in a new pattern and make for a wonderful, annual surprise. At around the same time, three giant Christmas trees are raised in the Rome’s biggest and grandest piazzas: in Piazza Venezia, Piazza San Pietro (the Vatican) and Piazza Colosseo (the Colosseum). These mammoth trees are always garnished with graceful lights and appear to waiting to be the photo on your Christmas cards.

Throughout December, a must-see for the Christmas season is the Christmas Market in Piazza Navona—other cities like Trento in the north also indulge in the Christmas market . Though the Piazza Navona market leans towards commercialised vendors, many Italian families still bring their children into the capital to ride the carousel and stuff themselves with sweet snacks. It’s a romantic walk at night when you can get a glass of vin brulé, or hot wine. Another Christmas season standby is the 100 Presepi (or nativities) exhibition open from  November 28 to January 6 in Sala del Bramante near Piazza del Popolo. Like the name claims, there are 100 different nativities on display annually. Some of them are beautiful and some of them are strange.

The biggest night of the holidays in Italy is Christmas Eve. And the most popular show around is midnight mass at St. Peter’s Basilica. If you want to go inside, you’ll have to reserve your tickets at least two to six months ahead of time through the Vatican. If you don’t have a ticket, you can still catch the show on the enormous TV screens hovering throughout the piazza while enjoying the Vatican’s beautiful nativity scene in the centre of the piazza. But the Christmas Eve midnight mass doesn’t necessarily have to equal Vatican. Many churches in Rome and Italy host their own masses. Try Santa Maria Maggiore near Termini or Ara Coeli on the Capitoline that lines its 124 stairs with candles.

Christmas Day throughout Italy is traditionally time to spend with family and so the streets will feel drowsy and quiet, especially from morning until late afternoon. The most activity can be found in Piazza San Pietro in the Vatican at noon for Pope Francis’s “Urbi et Orbi” speech given from St. Peter’s loggia.

The Legend of Befana

After New Year’s Day, the holiday season in Italy still has one more festivity to go: the Epiphany on January 6 is celebrated as Befana. The story behind the holiday goes that on the eve of January 5, the witch Befana flies on her broomstick and dives down chimneys to deliver gifts to good children, much like Santa Claus. She stuffs her presents into socks hanging from the mantel if you’ve been good and coal if you’ve been bad. If you’re in Rome, head to the market in Piazza Navona where you can get your own Befana tree decoration and maybe a glimpse of the ugly lady herself. In many other towns throughout Italy, Befana comes out to the piazza on January 6 to great children.