As recommended by 99% of users on TripAdvisor!

Come out with us on this unforgettable romp around Soho. Packed with killer cocktails, rock n’ roll landmarks and seedy stories from London’s past you’ll soon be retelling yourselves!

You’ll discover all the hidden spots and secrets in one of London’s most legendary neighbourhoods- Soho, enjoying three fabulous cocktails along the way. If you want  some delicious bites to go with your cocktails you can add on our optional Premium Food Package. There is no better way to kick off a night in Soho than this!

What you’ll Experience on this Soho Cocktail Tour

Throughout this 2.5 hour evening cocktail tour, you’ll discover the club where the world heard Keith and Mick for the first time. You’ll see where Sir Elton cut his best album. You’ll return to the days when London’s sex shop mogul, Paul Raymond, was not only “the King of Soho”, but also the wealthiest man in Britain!

And of course, your host will educate and entertain you with stories about London’s wild nightlife, then and now while guiding  you on a stroll to three of Soho’s coolest cocktail bars to ensure that everyone remains in very high spirits.

Soho will never be the same!

Highlights of this Soho London Cocktail Tour Include:

Get the VIP treatment at London's coolest Gin Club

Pass iconic music venues and wander the neighbourhood that birthed some of rock ‘n’ roll’s biggest legends, such as David Bowie, The Rolling Stones & Elton John.

Visit 3 hidden and underground cocktail bars as you stroll Soho. Their location is sure to surprise you!

You will never look at Soho the same after this evening out.

Enjoy some killer bites along with your killer cocktails. Get three delicious food tastings during your tour with our Premium Food Package
for only £26 per person! 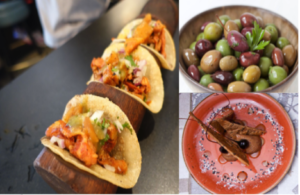 Enhance your experience with three bites expertly paired with your cocktails. You can add the Premium Drink Package to your booking during checkout.

Let's make one of your favourite London experiences together

Our aim is to make all possible accommodations for gluten-free, dairy-free or vegetarian diets

How to Arrive for Your Soho London Cocktail Tour

The starting location is easy to get to with public transport or taxi and will be sent upon booking.

At the end of our tour, our guides can point you in the right direction or call a taxi for you (or give you a recommendation of what to see next nearby)

You can cancel up to 24 hours before your tour date. For further details please review our cancellation policy.

Our tours run Thursday through Sunday. There are no tours on English National Holidays (approximately eight days per year).

Josh was great! It was a perfect introduction for us to London – we had a wonderful time!

Our guide Leigh was a local and he brought so much passion and knowledge to the tour! It was great fun to learn about the long and changing history of London’s old docks while traveling between and eating at 4 pubs dating from 1520 to 1976! And to top it all off the food and beers were perfect on a chilly February day.

Katie was a great tour guide. Loved the food. Thought the variety of food and venues was excellent. What a great introduction to the history and culture of Soho.

If you are coming to London with your entourage and you’d like to take a private London cocktail tour just for you and your group. Or are just looking for a more intimate experience, we can make that happen! Just visit our private tours page and fill out the form – we’ll help you plan the perfect London experience for you!

SAVE 10% on any experience when you sign-up for our newsletter!