When visiting a city, what we often remember the most is the experience of trying new and delicious local food. Portugal is home to some unique gastronomic wonders that often have a fascinating story about how they came to be, meaning you’ll remember not only their mouth-watering taste but also the interesting way in which they weave into the country’s history and culture. To make sure you don’t miss a single bite here’s Eating Europe’s guide to the best food in Lisbon.

Bacalhau refers to the national dish of Portugal: salted cod. Interestingly, most of the Portuguese bacalhau is imported from Norway and has been for centuries (in 2017 the country celebrated the 500th year of this unique relationship). The Portuguese have one of the highest fish consumption rates in Europe and cod is the only one that is not eaten fresh. Due to lack of refrigeration methods 500 years ago, the cod was preserved in salt as it made its journey across Europe and upon arrival was soaked in water for around 48 hours, meaning it retained a delicious salty flavor and a firmer texture than fresh cod.

There are legends throughout Portugal about the number of bacalhau recipes; ranging from 365 to 1,001. When you’re in Lisbon, we recommend sampling a pastel de bacalhau, a deep-fried potato fish cake, and bacalhau à bras, a dish made by mixing codfish, scrambled eggs, potato, and onion. The story goes that the latter was spontaneously invented by a man named José Bras in the infamous Lisbon neighborhood of Bairro Alto.

It’s impossible to think of food in Portugal without thinking of sardines. Lisbon has dozens of lojas de conservas: shops selling tinned sardines with lots of different seasonings and sauces. However, the best sardines are fresh, grilled, and served on a large slice of bread with a generous drizzling of salt and olive oil. The small fish is so popular, it has become an iconic symbol of the country, even making its way into art, music, and poetry.

The optimal time to eat them is in June because during this month Lisbon celebrates the festival of Santos Populares, centering on the night of the 12th and the day of the 13th – the day of Saint Anthony. If you visit the city during this time, you’ll find it draped in decorations, ringing with the sound of traditional pimba music and full of smoke from the hundreds of barbecues fired up across the city, all grilling up some juicy sardines. This particular delicacy is normally served without cutlery, so the lingering smell of sardines on your fingers means you won’t forget them in a hurry!

There can be no list of the best food in Lisbon without a mention of the pastel de nata. This little taste of heaven is a flaky, crunchy pastry filled with creamy, velvety custard and is the one thing you must not leave the city without tasting. However, not all pasteis de nata are created equally. Although you can find these custard tarts all over Portugal (in fact, all over the world as their popularity grows along with the city), legend dictates that there is only one place where you can find the original pastel de nata: a bakery in the Lisbon neighborhood of Belém.

The Antiga Fábrica dos Pastéis de Belém, operating since 1837, serves the pastry according to the original recipe, which was invented in 1834 and has stayed in the same family for five generations. Apparently, the recipe has never been written down and the people who know it are forbidden to travel in the same airplane, in case the plane crashes and they all die, taking the secret recipe with them!

Purists will tell you that any pastel de nata (meaning “custard tart”) found outside this bakery is only a poor imitation of the original pastel de Belém (meaning “Belém tart”). This is why in high season you can expect to wait upwards of 30 minutes to enter the famous café. We think while this version is unique and delicious, there are many pastel de nata experts baking up near-perfect versions of this traditional treat throughout Lisbon. Plus, you shouldn’t leave without trying at least a few!

A post shared by The Woks of Life (@thewoksoflife)

Coming from the Alentejo region, just south of Lisbon, this dish is the ultimate comfort food! Combining porco à alentejana: an exquisite pork stew, with migas: pillow-like dumplings made by soaking yesterday’s stale bread in the pork fat and juices, this Portuguese delight proves that sometimes simple food is best!

It’s traditionally served with a slice of orange for a hint of sweetness and goes down well with a glass of red Alentejano wine. The grapes in this region spread across its sloping hills and soak up plenty of sun, producing a light and fruity red that is a wonderful complement to this salty dish.

Although technically not a food, this bite-sized wonder deserves a mention on our list. In the charming Lisbon neighbourhood of Alfama, elderly ladies tend to sit at small tables and call out to passers by, “olha ginjinha boa!” This means they are selling homemade ginja, traditional Portuguese liqueur made from cherries.

Ginja has a reputation in the city for being a magical remedy as in the old days, doctors would prescribe it instead of medicine, with six shots being a perfect cure for all ailments from a headache to a broken leg. For an extra dose of magic, ask for your ginjinha (meaning “little ginja”) in a copo de chocolate: a small shot glass made entirely of chocolate, transforming the drink into a boozy and delicious snack!

Lisbon’s gastronomic tradition combines delectable food with legends and stories, meaning you won’t easily forget tasting them. Whether it be one of the hundreds of bacalhau dishes or an authentic pastel de nata, don’t leave Portugal without savoring one or all of the treats on our list of best foods in Lisbon!

Looking to taste all the best food in Lisbon in one day? Join us on our Eats, Street Art, and Undiscovered Lisbon Food Tour which takes you through the local neighborhoods Baixa and Mouraria, discovering street art and enjoying a feast along the way.

A Night Out in Bairro Alto

An unforgettable evening of food, spirits and superstitions from the Portuguese explorations

Originally from Scotland, Lara has been residing in Lisbon for almost three years after she fell in love with Portuguese pastries. A polyglot with a passion for food and writing, she has written for both travel and literary publications.

Romantic things to do in Lisbon for Valentine’s Day

Planning to spend the most romantic day of the year in Lisbon? A city break can be a wonderful way to get some quality time as a couple: exploring a new plac...

The festive season is coming in Europe and with it, the arrival of Christmas markets! If you’re planning a trip to one of our cities this winter, a Christmas... 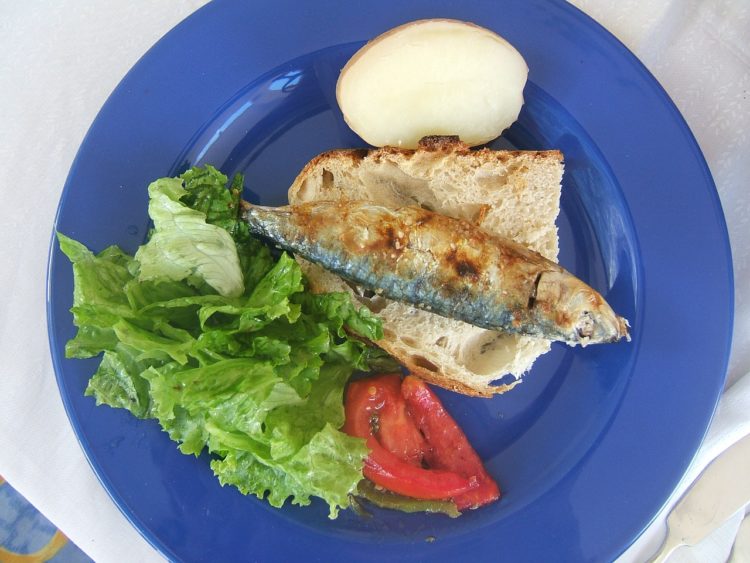 Sardines in Lisbon - A Brief History and Where to Buy Them

Probably the only city in the world in which a type of fish is considered a national icon, the history and culture of the Lisbon sardine is a topic of mounti...