I am an unabashed lover of pizza especially pizza in Rome. I am always on the look out for a new spin on this old creation. That is why I love Sforno here in Rome because they use a whole-wheat sourdough crust that you just don’t find anywhere else in the city. Or my favorite pizza al taglio (pizza by the slice) can be found at Eligio Fattori in Monte Verde where the unique combinations of toppings display a degree of creativity would make Steve Jobs begin to question his level of innovativeness.

This past weekend I discovered a new pizza. I was in Nemi, a picturesque town located in the Castelli Romani hills outside of Rome. A town who’s national reputation is owed to one tiny fruit. Though tiny in size, this fruit packs one giant punch. In fact it is considered a SUPER FRUIT. I am talking about none other than the strawberry.

Researchers claim that the all might strawberry contains properties that most fruits could not even touch. If Eligio Fattori could challenge Steve Job’s pioneering spirit than the strawberry could rival his potency. Allow me to break this down for you. Strawberries are considered a natural beauty aid- reducing the appearance of freckles and sunspots. They are said to be a natural painkiller and unlike its artificial counterpart, Ibuprofen, strawberries do not irritate the stomach. Well they actually do irritate my stomach, but so does white toast and water so my stomach lost its right to an opinion when it comes to a food’s digestibility. Plus if I concerned myself with what irritated my stomach I would be leading natural cleanses somewhere in India, not food tours in Italy. Speaking of stomachs, strawberries are shown to increase rate that our body burns fat so any stomach would be happy about that. And if that gives you reason to smile, guess what? Strawberries whiten teeth and prevent teeth decay (wouldn’t have guessed that one). 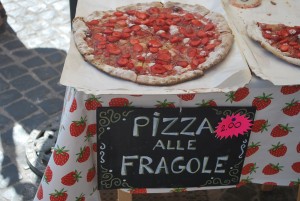 So back to this pizza that I encountered and then quickly devoured last weekend in Nemi. It was topped with not just the most omnipotent fruit in the land, but also some delicious chocolate and sprinkled powder sugar. All the toppings rested on top of a crust that managed to be both airy and crispy- a combination that is often attempted but rarely achieved. In a nutshell it was fabulous.

So do your body good and eat a strawberry pizza, and what you will gain in calories you will lose in freckles- how about that for a tradeoff. Better yet run to Nemi because the strawberries will soon be gone.

Things to do in Rome- “La Passeggiata”