Not far from Amsterdam’s city center, the Jordaan district is one of the best loved neighborhoods in the city. Charming narrow streets give way to flower-lined canals, and there are plenty of quaint shops and boutiques, as well as cafes, restaurants and artists’ studios to keep everyone entertained. More than any other part of Amsterdam, the Jordaan exemplifies a peaceful, Dutch way of life and after one visit, you’ll certainly want to come back for more things to do and see.

Where is the Jordaan?

The Jordaan is clustered between the four canals of Prinsengracht, Lijnbaansgracht, Passeerdersgracht and Brouwersgracht, on the west side of Amsterdam’s main ring of canals (called the grachtengordel). You can walk there from the central train station, but if you don’t feel like walking the neighborhood is easy to reach by public transportation.

History of the Jordaan

The Jordaan was built in the early 17th Century when Amsterdam’s expanding population demanded more space for the working class. During the 1600s, Amsterdam was one of the richest cities in the world. But it was to the Jordaan where refugees, emigrants and workers went to live because of the low rents. The small houses were usually crammed full with large families, and struggling artists also found their home here. The most well-known was painter Rembrandt Van Rijn, who moved to a house on the Rozengracht when he could no longer afford his house in the city center.

The Jordaan gradually degraded into a slum and hit a low point during World War II. After the war, it was proposed to destroy the area completely and build new apartment buildings in its place. But on the initiative of a few impassioned citizens, the Jordaan was saved from destruction and given a second life, with real renewal beginning in the 1970s. Now, the Jordaan is known for being an artistic district and is one of the most desirable areas of Amsterdam in which to live.

What to do and see in the Jordaan?

Take in the delightful side streets and wander the canals! But if you’d prefer some direction to your wandering, take a food tour. There are two on offer: both last 4 hours and allow you to taste a dozen typically Dutch food delicacies while learning about the history and culture of the city. However, while the Jordaan Food Tour is a walking-only guided tour (don’t worry – there are plenty of rest stops while you eat!), the Jordaan Food & Canals Tour also includes an hour’s canal cruise on board a beautiful antique boat.

Meanwhile, if it happens to be a Saturday, head to the market. On Saturday there’s the Lindengracht Market on the canal of the same name where you can find lots of fresh fruits and vegetables and watch the residents of the Jordaan (and many other Amsterdammers) do their shopping. Also on Saturday is the organic food market, called the Noordermarkt (which is also the name of the square on which it’s held), as well as an eclectic flea market.

Join us on our food tours of Amsterdam to find out where the locals eat and drink! 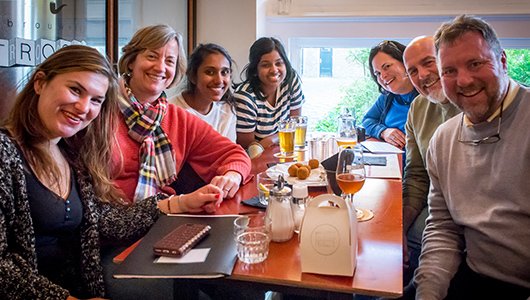 Check out Dutch foodie ideas, mouthwatering pics and much more on…

For museums, there’s the Anne Frank House, which actually isn’t in the Jordaan but borders it. But if your taste in museums requires something out of the ordinary, head to Electric Ladyland, the world’s only florescent light museum. When you step inside you’ll time travel back to the 1970s by the glowing, brilliant vision of one man’s light sculptures. Also, check out Viator for savings on other tours throughout the Jordaan neighborhood.

While walking the tranquil streets, keep a look out for the inner courtyards, a very “Jordanian” feature. The courtyards were built for elderly women and given to them to live in for free. When the whole area fell into disrepair, the courtyards also suffered, although most have now been restored. Another peculiarly Jordanian feature is the stone tablets above doorways that were carved to announce the profession that once occupied the house. For example, if the family worked as tailors, there would be scissors carved into the tablet above the door – take a wander around and try to guess what a stone tablet could mean.

Where to eat in Jordaan?

The Jordaan neighborhood has some of the best food in Amsterdam, concentrated into a small area. If you’re looking for a cafe to spend your day, eat lunch or just take a break, try Cafe de Tuin (Tweede Tuindwarsstraat 13; cafedetuin.nl) and pull up a table with the locals. For a Dutch feast, head to De Eetkamer van de Jordaan (Westerstraat 76; restauranteetkamer-nl). Or if you’re just looking for dessert, and by this we mean ice cream, try out Monte Pelmo (Tweede Anjeliersdwarsstraat 17; montepelmo.nl).

This post contains affiliate links to products and services. We may receive a commission for purchases made through these links.