Art, music, architecture – these are just three of the things you might associate with the continent of Europe – but there’s so much more to it than that. (And we’re not talking about literature, language or philosophy either)

Let’s look at some of the weird and wonderful things Europeans do with food – it seems to often involve throwing it at people.

Head to the town of Rapperswil, Switzerland, on Shrove Tuesday and you can witness a tradition that dates back to 1350.

Children gather in the main square in front of the city hall and at 15:15 exactly a council member opens a window and asks, “Are all my boys here?” The children respond with, “Yes, one, two, goat-leg.” This is the signal for sausages, bread rolls and gingerbread to be dropped to them below.

It’s thought the tradition goes back to the destruction of the city by the then Mayor, which resulted in kind citizens serving food to hungry children through the windows of their houses. 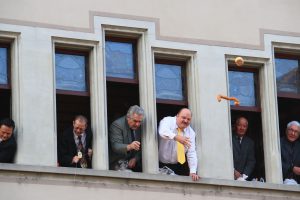 Every February in the Northern Italian city of Ivrea, nine teams assemble, armed with crates of oranges for the juiciest food fight going.

Some say the battle stems back to when commoners threw the beans the feudal lord had given to them back at him. Others say it represents the civil war that broke out the day after the murder of hated tyrant Raineri di Biandrate.

What we know for a fact is that 400 tons of oranges, that would otherwise be thrown away, are pelted at each other until the festival judges decide on a winner – based on the throwing skills and costumes!

In the town of Haro in the Rioja region of northern Spain, thousands of people gather annually to pour wine over each other in memory of a land dispute between two neighboring towns.

A parade leads everyone up the 7km to San Felices de Bilibio, where a Mass takes place. Buckets, boxes or water pistols are then loaded up with red wine and battle commences. Once everyone is suitably soaked, they head back into Haro to dance the night away.

So, we’ve thrown sausages, oranges and wine around, now it’s time for some tomatoes to get in on the action.

We’re in Spain now, Buñol near Valencia to be precise. Here we’ve got 175 tons of ripe tomatoes to throw at each other. This event became so popular, with over 40,000 people flocking to the small town, that there is now an official ticketing system is in place to keep the number to 20,000.

It’s rumored the origin of this event lay at the hands of youngsters who threw tomatoes at a parade back in 1945.

What do you get if you take one very steep hill, a wheel of cheese and some competitive British people? It’s the annual Cooper’s Hill Cheese rolling event of course.

Taking place near Gloucester, England, a round Double Gloucester cheese is rolled down a hill and competitors chase after it. The first person over the finish line wins the cheese.

Chris Anderson won the race in 2016, although he says he doesn’t actually like cheese…

Here’s a slightly more sedate way to spend your time. Sit in a rubber dinghy, or home made raft, full of beers and float down a river in the Uusimaa province of Finland.

The event began in 1997 when 10 members of a band decided to float down the river drinking beer. By 2011 around 5 000 people had caught on. With no official organizer, the festival relies on word of mouth and social media to arrange the date.

Every August in the town of Trie-sur-Baïse, in South-Western France pig enthusiasts gather. Here they indulge in piglet racing and black pudding eating competitions. Oh, and of course…a pig squealing contest. This is where participants try their best to imitate the noises pigs make at all stages during their lives.