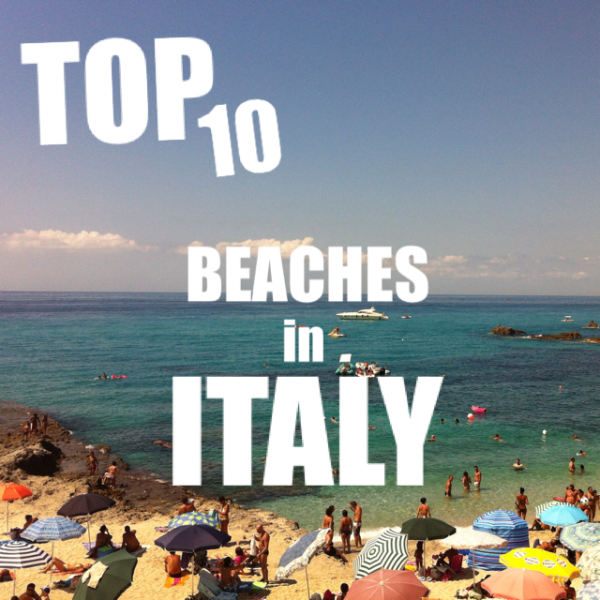 It’s no secret that Italy is home to some of the most stunning beaches in Europe. The combined coastlines on the east and west as well as the islands, the big ones like Sardinia and small ones like the Tremiti Islands, make it difficult to choose where to lay down your towel. The best beaches have crystal clear water and are accompanied by a spectacular coast. Some of these best beaches are easily accessible, most are quite crowded at the height of summer (August) with Italians and foreigners alike and all are worth every effort to get there. Spending days on the beach really is the best part of Italy in summer. What follows is a list of our favorite Italian beaches, from north to south.

This charming cove, translated as Bay of Silence, is one of Liguria’s most romantic beaches. The town of Sestri Levante, with its sunset-colored buildings, juts out into the water on a peninsula and has two bays on either side of it. The Baia di Silenzo is a sandy public beach on this peninsula that is a favorite with locals and tourists.

On the eastern coast of Sardinia, Cala Luna is one of those rare beaches that make you believe you’ve found a piece of paradise. Named Cala Luna for its half-moon shape, the cove is a strip of white sand surrounded by limestone cliffs. Getting to this beach either means going for a 4 km hike or renting a boat, but once arrived, you’ll realize that the effort was worth it. (The seclusion also means no beach umbrellas and fewer people.)

On the northeast coast of Sardinia is the Emerald Coast where some of the best beaches of the whole island are located. These waters are where the rich and famous come to spend their summers, but there is plenty of space on the beach for everyone. The Spiaggia del Principe is one of the best for its wide arch shape and natural landscape. There is about a 10-minute walk from the road to the beach.

This small island off the coast of Tuscany makes for a relaxing beach getaway. The main beach town, Campese, has a good stretch of sand and some of the cleanest water in Italy. Though around the whole island there are small coves and beaches that are a pleasure to explore by boat, foot or scooter.

The Amalfi Coast has some of the most dramatic scenery in Italy, with its ravishing cliffs that drop into the Mediterranean Sea. And no other town on this jagged section of Italy epitomizes it better than the charming town of Positano. Go for a swim in the refreshing water with the Lattari Mountains speckled with colorful houses in the background.

The Tremiti Islands are an archipelago of five islands located off the eastern coast of Italy. The island of San Domino is where most of the visitors flock to in summer for its clear water and sandy beaches. Come here for the snorkeling as the underwater life is some of the best and most varied in Italy.

The nature reserve of Torre Guaceto is a place to escape the crowds.

If you’re looking for a more natural beach alternative to the rows of sun beds and umbrellas that make up most of Italy’s beaches, then look no further than Torre Guaceto, a nature reserve. Of course, an escape from the crowds means that you might have to do a little walking (be sure to bring your own food and water) but when you stake out your spot besides the cerulean sea, it’ll be worth it.

Maratea is Basilicata’s only town on the Tyrrhenian coast. It is composed of an old medieval center on a hill overlooking the sweeping seaside and about twenty beaches on the sand below. The terrain varies from rocky cliffs to rolling green mountains. Head to the area around Santovenere for the very best beaches.

This amazing beach town in the region of Calabria sits on the top of Italy’s boot. The old historic center has an imposing spot above the beach of white sand. Head a little bit farther south around the promontory to Capo Vaticano where you can find the area’s most popular beaches.

On the western side of Sicily, south of Trapani, the lovely beach of Cala Rossa is well known for its turquoise waters and rugged scenery. This beach is a great place to escape the summer crowds, and the beach umbrellas.

Where to Brunch in Prague: Part One