The name of Testaccio is yet to be discovered by the masses; even in Rome, it remains a secret known mostly to those who live nearby. Yet this tucked-away corner of the city has more than earned its nickname, ‘the heart of Rome.’ For those who come to experience Testaccio’s dynamic, working-class atmosphere, the unique foodie culture proves truly worthy of the strange history from which it sprung!

Testaccio is the south-westernmost ‘rione’ (or ‘region’) of the walled city. Pressed up against the east bank of the River Tiber, the area has long been a trading hotspot, and city planners used the merchants’ discarded olive oil jars to create the ‘mountain of fragments,’ or Monte Testaccio, from which the rione takes its name. And it’s a whopper! They reckon that this artificial hill is made up of nearly 80 million pots, piled 115 feet high (with another 45 feet below street level). 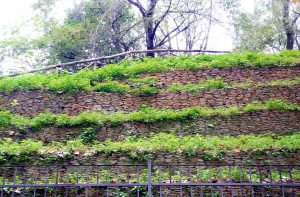 Far from being a waste site, we now know the mountain was carefully cultivated, with pots cut into pieces to fit against each other and form a structure. And it’s this structure that makes it so relevant to foodies today. Monte Testaccio has enjoyed its own mini-renaissance since the mid-19th-century, when the pottery mountain was first used as a military vantage point, and then burrowed into to create wine caves. When you visit, you’ll see that caverns and cubbyholes in the mountain have been transformed into bars and restaurants such as Flavio al Velavevodetto, an osteria that serves delicious local food.

Life and soul of the city

Take a short stroll from the hill, and you’ll find the market where the local chefs source their freshest ingredients. The Mercato Testaccio has been open over 100 years, and its recent relocation and modernisation have allowed the district’s street food culture to come into its own. It’s here that you’ll find terms like ‘gourmet’ and ‘take-away’ needn’t be considered mutually exclusive, and you’ll be grateful for the chance to people-watch and wander the stands while you decide what to eat! 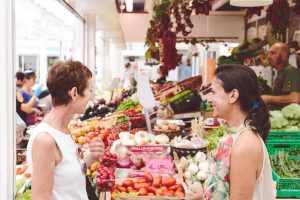 But the Mercato is not entirely divorced from its bustling history. Family-run fruit-and-veggie stands and delicatessens remain an essential part of Roman life. And even as modern street art looks down on you from the surrounding walls, archaeologists continue to reveal astonishing discoveries all around, such as the unbroken pots that held the building aloft before its redevelopment and which can still be seen in the basement.

Testaccio’s most distinctive dishes, however, originate from a part of town that has now become its cultural hub.

Around 130 years ago, the area between Monte Testaccio and the river became the site of a new abattoir and cattle market, from where the workers would take scraps and morsels to cook up their evening meals. Local innkeepers took the rest and competed with each other to tempt the market’s visiting porters and drivers with recipes of great imagination and resourcefulness. It’s no wonder word of working-class specialities such as trippa alla Romana (tripe) or oxtail stew soon spread across the capital. Not surprisingly, Romans elsewhere in the city associate Testaccio with its delicious cuisine more than with the broken pottery beneath the rione’s surface!

Today, the abattoir has been converted into MACRO, Rome’s Museum of Contemporary Art, and the space also houses the Citta dell’Altra Economia – a centre for all things organic and fair-trade, where you will find a café, market, shops, and even a food festival when the time is ripe.

To experience the food and local life of the district try the Taste of Testaccio tour and enjoy the fruits of Testaccio’s culinary history away from the crowds of Rome’s more commonly trodden paths.