Let’s be honest; at the beginning of autumn we all welcomed the change in season with open arms. We pulled out the jackets that had been gathering dust all summer, went out and bought a brand new scarf, and thoroughly enjoyed a nice Autumnal walk through the park.

Then we realised that the arrival of autumn would mean the sun setting earlier, and mornings getting darker, and having to turn the heating on for the first time in about eight months.

Still, it’s not all doom and gloom because, right at the end of October, we can embrace the one day of the year when it’s socially acceptable to walk down the street covered in fake blood, wearing the scariest costume you could throw together at the last minute, and asking strangers for candy.

London is full of reportedly haunted buildings and sites, from 50 Berkeley Square to the Greenwich Foot Tunnel so, with that in mind, we decided to put together a list of some haunted places in London that you might want to visit if you’re spending Halloween in the capital. Well, if you’re brave enough of course…

The Tower of London

We’ll get the most obvious one out of the way first because, with its history of death and torture, is it any surprise that The Tower of London’s said to be one of the most haunted places in not just the capital itself, but the whole of the UK?

Located on the north bank of the River Thames, right next to Tower Bridge, The Tower of London was most famously used as a prison during the 16th and 17th centuries but, despite its reputation, only seven people were ever executed in the building itself. The majority of the executions took place on Notorious Hill to the north of the tower.

So, is The Tower of London really haunted? Well, the most persistent of all of the ghosts there is apparently the ghost of Queen Anne Boleyn, one of Henry VII’s wives. She’s said to haunt the area close to Tower Green, where she was beheaded in 1536, and has also been seen walking the corridors of the tower with her head under her arm!

Anne Boleyn’s not the only ghost of the tower though. There have been many sightings over the years and, although the likelihood of seeing a ghost on your visit is small, the idea of waking around a building that’s notorious for its paranormal activity is especially tempting at this time of year.

If you go on our London tour you’ll pass by some of the places Jack The Ripper used to frequent around East London including The Ten Bells Pub where, in 1888, Jack The Ripper found a girl called Annie Chapman and beckoned her outside. Later, her body was found on nearby Hanbury Street and Annie’s poltergeist is said to haunt The Ten Bells with reports of objects moving of their own accord and gusts of wind blowing through the pub.

You can find The Ten Bells at 84 Commercial Street, London, E1 6LY so why not drop in for a pint (or something a bit stronger if you’re hoping to catch Annie in action).

Burial place of Karl Marx and Douglas Adam, Highgate Cemetery was (in its heyday) a fashionable place to be buried. Families would try and outdo each other with extravagant monuments and the cemetery became a place to visit even if you weren’t coming to see the grave of a relative. However, after the Second World War, the cemetery went into decline and has since been the setting for many a ghost story.

One of the most famous stories is that of the man whose car broke down near the cemetery and claimed that he’d seen an apparition with red eyes glaring at him through the gates. Another man spoke of being knocked off his feet by a creature who appeared to have glided down from the cemetery walls, only to disappear into thin air when the headlights of a car shone on it.

Highgate Cemetery is actually a very beautiful place to visit though. Its home to all sorts of plants, wildlife, and funeral architecture and its rich history is definitely something to ponder on while you make your way through the East Cemetery (where you’ll find Karl Marx’s final resting place) and the West Cemetery which is currently by guided tour only.

Highgate Cemetery can be found on Swain’s Lane in North London and the best way to get there is to take the tube to Archway, High Barnet branch on the Northern Line. Parts of the cemetery are free to walk around whilst some are by guided tour. For more information and admission charges, click here. 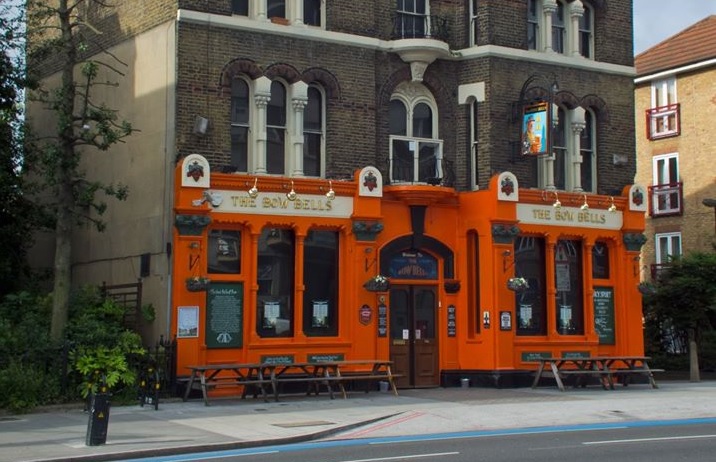 This one’s purely for the ladies. Not because men don’t deserve to get spooked by London’s best ghosts but because this ghost in particular only performs in the ladies bathroom of the Bow Bells Pub in East London.

Nicknamed The Phantom Flusher, the ghost at the Bow Bells is said to flush the toilet in the ladies loos whilst it’s….shall we say….in use. You’d be forgiven for thinking that this could all be put down to a malfunction with the actual toilet but, in 1974, when the spirit was asked to show itself during a séance held to get rid of it, the door to the bathroom was slammed shut so hard that panes of glass shattered.

Apparently the presence of the ghost can still be felt to this day so, if you want to check out the Phantom Flusher for yourself visit Bow Bells at 116 Bow Road, London, E3 3AA. Even if ghostly goings on aren’t your thing, a drink at Bow Bells isn’t a bad idea. It’s a proper East-end local, with a nice atmosphere, and a great place for a quiet drink.