One of Rome’s most beloved fountains is Fontana di Trevi, or the Trevi Fountain. You can find it in the city centre, between Piazza di Spagna and the Quirinal Hill. It’s easy to stumble on by accident, the narrow streets seemingly wrapping around themselves until they give way to a small piazza from which towers an enormous, elaborate fountain—surely knocking your breath away. The Trevi Fountain is also one of the most visited landmarks in Rome so if you’re visiting be prepared for crowds.

The story of the Trevi Fountain begins all the way back in 19 BC when Marcus Agrippa, friend and son-in-law to the Emperor Augustus, built an aqueduct called Aqua Virgo, or Virgin Water. Unlike other aqueducts, Aqua Virgo ran mostly underground. The story of how the water got this name varies, but the most imaginative is that while the Roman soldiers were out hunting for a water source at which they would start building Agrippa’s aqueduct, a virgin pointed them to an abundant supply. Other stories go that the water was so named because of its purity, which was often written about in ancient texts.

With the fall of Rome, the Aqua Virgo fell into disrepair with the rest of the ancient city. Skip forward to the Renaissance when the Popes began to invest money in the city again, and water for the residents was an important task on their mind. They revived old aqueducts and put large fountains at the end of them with large basins for the people to collect their daily water. Perhaps smaller than the Fontanone on Janiculum Hill, a papal fountain was built at the end of the Aqua Virgo, now called Aqua Vergine. But in 1629, Pope Urban VIII decided he needed something a little more grandiose. Bernini was hired to make a sketch of a fountain to replace the smaller one but when Urban died, the plan was abandoned.

Under the reign of  Pope Clement XII, one-hundred years later, competitions were held to see which Baroque artist could sketch the best fountain for the Aqua Vergine. The winner was Nico Salvi, who won with his design for the Trevi Fountain. But Salvi died before the Trevi Fountain was finished, in 1762. 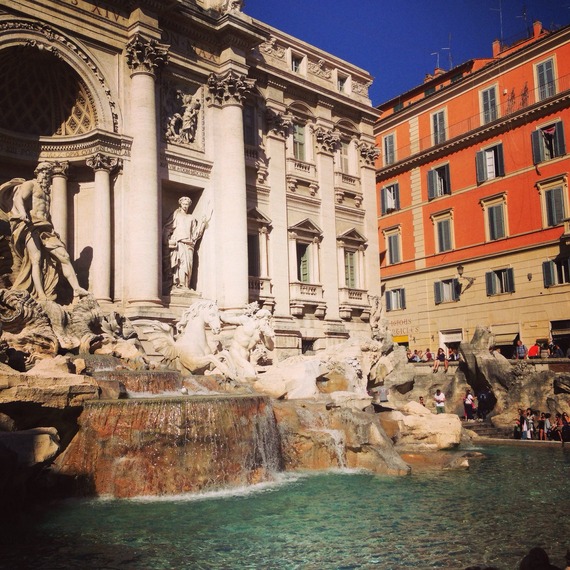 Looking at the fountain, the first thing to strike you will be its enormity. After that settles in, you can start taking in the details. In the centre, looking confident, is Neptune or Oceanus or the god of water—whatever you want to call him. He is driving a team of hippocamps, or sea horses. The one on the left isn’t listening, while the one on the right seems calmer. Salubrity and Abundance are the two women in the niches, and above them, the high reliefs depict the history of the Aqua Virgo. On the right, the young woman points out the source of the water to the soldiers; on the left, Agrippa supervises construction.

Many people head to the Trevi Fountain not only to take a look at it but also to toss in a coin, which is said to ensure a return to Rome. You are supposed to throw the coin with your right hand behind your left shoulder. Though this tradition didn’t start with the movie Three Coins in the Fountain, from 1954, it certainly popularised this tradition. With hundreds, and a thousand in the high season, of tourists throwing coins into the Trevi Fountain every day, that’s a lot of money (about 3,000 Euros per day). If you do the coin toss too, know that the money is collected by the charity Caritas to feed the homeless of Rome.

Visiting tips: Go see the Trevi Fountain late at night when the crowds die down. Even though you can’t get in it, it’s still refreshing to sit by the water and listen to it falling.

Contact [email protected] with Blog Enquiry in the subject title for any feedback or requests for a topic you want us to cover. Voted one of the best things to do in Rome, Eating Italy Food Tours offer tours in Rome through the city’s oldest and most characteristic neighborhoods.

London Sightseeing Tips: How to see London on the Cheap