If anyone would ask me the question, “What should I see in the Vatican Museums if I only have one hour?” I would respond, “Nothing!” If you only have one hour to visit the Vatican Museums I would suggest that you not go. The Vatican Museums host the vast collection of art gathered together by the Catholic Church over the centuries in a stunning series of buildings. The museums are so complex and so full of art from every century that to only allow an hour would be like hanging the carrot in front of a donkey, a tease for all you couldn’t see. And it bears mentioning that the wait time to get in might already top over your time limit.

Instead, if you only have an hour to see something of the Vatican I would suggest that you head to St. Peter’s Basilica. Getting in usually takes about 15 minutes, which leaves about 45 for a quick tour inside, and not to mention, it’s free. Line up to the right (facing the Basilica) to go through the metal detectors before entering. And while you’re waiting, take in the basilica’s facade designed by Maderno, its dome designed by Michelangelo and its encompassing colonnade designed by the sculpture Bernini.

The original church, built in the time of the Emperor Constantine (in the early 300s AD), was constructed over the grave of St. Peter, who was martyred during the reign of Nero in his hippodrome that was once nearby. The current building dates from the Renaissance and is certainly one of the biggest and most impressive buildings from that time. Even now, it is one of the largest churches in the world. From planning and designing to its actual construction, the basilica went through a tiring cycle of architects, from Bramante to Michelangelo to Bernini, and so it’s amazing that the building seems a concise artist vision.

Once inside take time to just soak in its grandeur: the multicolored marble, some of it swiped from the Imperial Roman structures around the city, the excellent use of space to convey a sense of limitlessness and the way the heavy marble columns seem to float weightlessly heavenwards. Then veer to the right where Michelangelo’s marvelous Pietà mourns piously behind the Plexiglas and flashing cameras.

Continue on through the transept, crossing over into the wide nave. At the end of the nave and below the dome is Bernini’s tortured baldicchino that rises in bronze above the altar. Bend your neck back and take an admiring view of the dome, which was designed by Michelangelo. Though it is not as large and round as Brunelleschi’s Duomo in Florence, it was still quite an impressive piece of architecture in its day, a sense of which it still retains. The dome has an elegant egg-like shape that is in balance with the rest of the church. (And if you’re able to draw out another hour, it’s worth a climb for the views of Rome from the top.)

At the end of the church, in the apse, is another piece by Bernini, the Cathedra Petri. The baroque explosion of gold that gives way to the Dove of the Holy Spirit in glass appears to be the focal point of the piece. Though it was built to enshrine the relic of St. Peter’s chair, which can be found below the golden explosion, in the hands of the four founders of the church.

Wander back to the front of the church along the other transept, taking a look at the huge paintings that aren’t really paintings but mosaics. There’s a reliquary that isn’t that interesting and can be skipped if you don’t have the time. Exit off the porch to the right, catching a glimpse of the Swiss Guards in their clownish suits. And you shouldn’t have much time left of your hour. 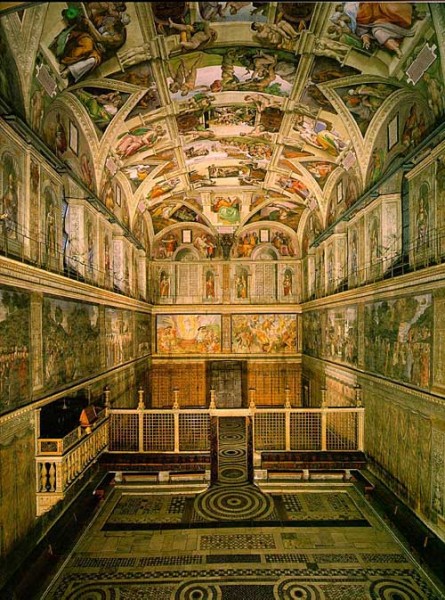 Ok, ok, if you’re still thinking, “But wait, I really want to see the Vatican Museums and I have only one hour, what should I do?”

My advice: Head straight for the Sistine Chapel. Maybe you can tack on the frescoes in the Raphael Rooms. Maybe you can detour off to see the Laocoön and Apollo Belvedere. Maybe instead you want to see a Caravaggio…. (See, I told you!)

Christmas Food and Traditions in Italy