I just arrived in Rome after being away for 2 weeks and my usual feeling of relief and happiness upon returning home quickly turned into a mix of shock and fear. When I got back to my neighborhood I discovered that there was nobody living there anymore. Where were the little boys playing football in the piazza? Where were the Old Italian mamas with their cute little one-piece floral pattern outfits and grocery pull- carts in tow? Why was my café, a place that doesn’t even close on Christmas all boarded up? I felt like something terrible had happened and my mind started racing thinking of all the plausible explanations.

First I figured there must have been a massive evacuation probably caused by a radioactive leak that had sent toxic gas permeating through the air threatening to wipe out all life, as we know it. After pondering this for a while the conspiracy theorist that resides inside the back right corner of my brain started to doubt whether the gas was really toxic at all. The gas was probably completely harmless but Berlusconi had concocted this whole sinister plan as a way to showcase his “leadership skills”. Damn you Berlusconi! I began seething just thinking about the depths to which the Italian Prime Minister will sink. Then suddenly a more rational voice inside my head asserted itself and reminded me that there really weren’t many factories operating inside Rome. I was quickly convinced that the gas leak scenario was probably unlikely.

I began racking my brain for a logical explanation to how my normally vibrant neighborhood could have suddenly turned into a ghost town. After a few minutes I decided that it must have something to do with zombies. While I had yet to see any of these creatures lumbering through the streets, the fact that it was still daytime offered a suitable explanation. Suddenly it dawned on me that I desperately had to get back to the airport before nightfall.

As I made my way back to my apartment maybe for the last time ever I began to think of all the fond memories I had there I got a little nostalgic remembering my first shower there and the time I miraculously found three 2 Euro coins wedged in between the sofa cushions though I became irritated when I couldn’t recall what I did with the money. On my way back I noticed that all the closed up stores had a small note stuck to the door. Each note simply stated that the establishment would be closed for the next 3 weeks to a month.

I began frantically tearing them off and collecting them as proof of the suspected zombie kidnappings. Anxiously, I looked for anyone who could help but there was no one left in the streets to listen to me.

Finally I found a small group of older men who must have been quite tough to survive this deadly episode. I presented them with the stack of abduction notes that I had collected as evidence. After trying to reason with these stubborn old men for nearly 30 minutes I gave up when it was clear that they found my zombie theory to be totally unfounded.

Unsatisfied with trashing my own carefully thought out explanation they had the nerve to present their own preposterous theory. They began to tell me about a holiday called Ferragosto that apparently is celebrated on the 15th of August. I suggested that it must be something new because in my 3 years living in Rome I had never heard of such a day. To this they explained that the Roman Emperor Augustus in 18BC first introduced it. They went on to tell me that in Rome everyone heads to the beach for several weeks this time of year and that the notes that I had determinedly tore down were left there intentionally by the owners of the shops to indicate to potential customers the exact dates when their place of business would be closed.

I stood there in complete disbelief. How could an entire neighborhood close-up and go to the beach for a month? I began to seek out other “survivors” of the invasion to validate the worst of my fears. After looking hopelessly for someone to listen to me I finally found a middle age man sitting on a bench looking somewhat agitated. The man listened attentively to me for nearly a minute- if looking in my direction with the occasional head nod can be considered as such. Then he asked me in a calm manner if I had thought about where to eat in Rome with everything being closed. As I marinated on the idea of surviving off of wild chicory and fennel while avoiding the gaze of any resident zombies, the mild-mannered gentleman interrupted my reverie and presented me with a piece of paper. At the top it read (translated of course) 9 Places to Eat in Rome when The Rest of The City is Working on Their Tan.

I folded the list and placed it in my pocket and made my way back to my apartment where I had decided that I would remain in case those old men were right about this being just some kind of unique Roman tradition. In case some of your are worried about your own survival during this precarious time in the city I have decided to do my duty and pass on the contents of the list that were so generously shared with me.
But I urge you to be careful and in case my worst fears prove to be true please promise me that you will not dine alone. 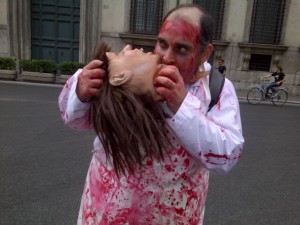 A True Tomato Poet in ROME