Oh, pizza – let us count the ways we adore you:

To be honest that sort of covers it. Is there truly anything better than a hot pizza straight from the oven being put in front of your hungry face?

The oldest reference to the word “pizza” dates back to 987 AD and was found to come from Gaeta, a village in Southern Lazio. It’s thought that it comes from the Latin word “pinsa” meaning flatbread. The modern-day pizza we all know and love stems from tomato being added to the top of focaccia (a type of flatbread) in Naples in the 18th century.

If the history of pizza is your thing, you might enjoy this book.

Naples v Rome – are you soft or crispy?

A poll by Società Dante Alighieri found that “pizza” was the best known Italian word outside of Italy (8 out of the top 10 were food!).

There are at least 25,000 pizzerias across the country – Did you know that you can’t legally be called a pizzeria without a wood-fired oven? With such a vast number of pizzas being made, there are obviously going to be a huge number of varieties with endless toppings available.

However, this National Pizza Day we’ll be concentrating on two types – the Roman and the Neapolitan / Romana and Napoletana.

Which is best – the deeper, softer base of the Neapolitan or the thinner, crispier Roman?

Don’t mess with the pizza police!

The main difference between the pizza of Rome and Naples comes from the dough. In Naples it’s made with flour, yeast, water and salt; in Rome they add olive oil which means they can stretch the dough to be thinner.

The most authentic Neapolitan is the margherita – topped with tomatoes, mozzarella and basil. The red, white and green making up the colors of the Italian flag. This pizza was created in honor of the Queen of Italy during a visit to Naples in 1889.

In 2009, the Neapolitan pizza was given a TSG, or Traditional Speciality Guaranteed label by the EU. Which as a result meant that only pizzas using San Marzano tomatoes and fresh buffalo mozzarella could be called “Neapolitans”. The “pizza police” in Naples are the deciders on whether you pass the test – here’s their criteria.

Roman pizza may have less of an elaborate backstory, and fewer strict rules about how they can be made – but the crisper, more rigid crust means that they can take the strain of more toppings.

On our Rome food tours you you get to eat some beautiful Roman pizza – but we’re being objective and putting this to the vote.

So, which is better: Romana or Napoletana? If you don’t have Twitter, let us know in the comments below.

🍕🇮🇹🏆 Let’s get this settled. Which is best? Pizza Romana or pizza Napoletana? #NationalPizzaDay🍕🇮🇹🏆 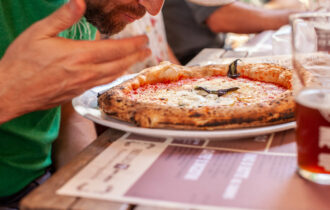 A Taste of Old Napoli

Stroll through an open market and discover local specialties 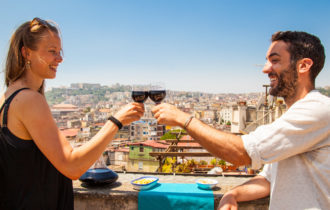 A Night Out in Naples

Experience Naples' nightlife through a feast of food and drinks

Rob is the Content and Social Media Manager at Eating Europe Food tours.

Local Tips to Find the Best Pizza in Rome