It goes without saying that Rome’s past plays an enormous role in its present: it is a curiosity and eagerness to discover what once was that draws us to Rome. There is, however, one sphere of Roman history that is rarely discussed: that of its food. While this could be for many reasons, my sneaking suspicion is that once you find yourself before the stunning simplicity of a Roman style Margherita pizza, its crust perfectly crispy, mozzarella melted in beautiful harmony over its tomato sauce, you don’t really care how it came to be or what its origins are. Yet each Roman dish has its own story, perhaps not as extravagant as the gladiators, but nonetheless worth knowing. Understanding the humble origins of that gorgeous plate of pasta will deepen not only your culinary experience but your knowledge of Rome and its past. Not to mention you can impress your dinner companions!

Below, a brief history on some of Rome’s most beloved dishes and you can read about other classics like Carbonara and Cacio e Pepe here.

In order to understand the beginnings of many classic Roman pasta dishes, we must first refer to gricia. Originating as far back as the 15th century, gricia was a dish developed purely out of convenience. Shepherds, who would spend months with their flocks away from home would travel with black pepper, unsmoked pig’s cheek (guanciale), and dried pasta, all ingredients that wouldn’t spoil easily. They would then combine these three simple yet essential ingredients with sheep’s milk cheese, which naturally was readily available to them. The result? The first ever version of gricia. Hearty and filling, gricia would certainly fortify the shepherds in the long days and nights that awaited them, and is still seen as the ultimate comfort food in Rome. At the turn of the 18th century shepherds began to move towards Rome, and are said to have brought their gricia recipe with them.

While they are undoubtedly ancestors, gricia and the widely popular amatriciana are separated by the latter’s use of tomatoes. The tomato arrived in 1548 from the New World and was originally used for decorative purposes. Italians were hesitant to eat them as some tomato variations were considered poisonous, but peasants in the South of Italy, inspired by their Spanish neigbors, eventually began to cook with them. By the 18th century the use of the tomato was becoming more and more common in Italy. The two have been madly in love ever since. 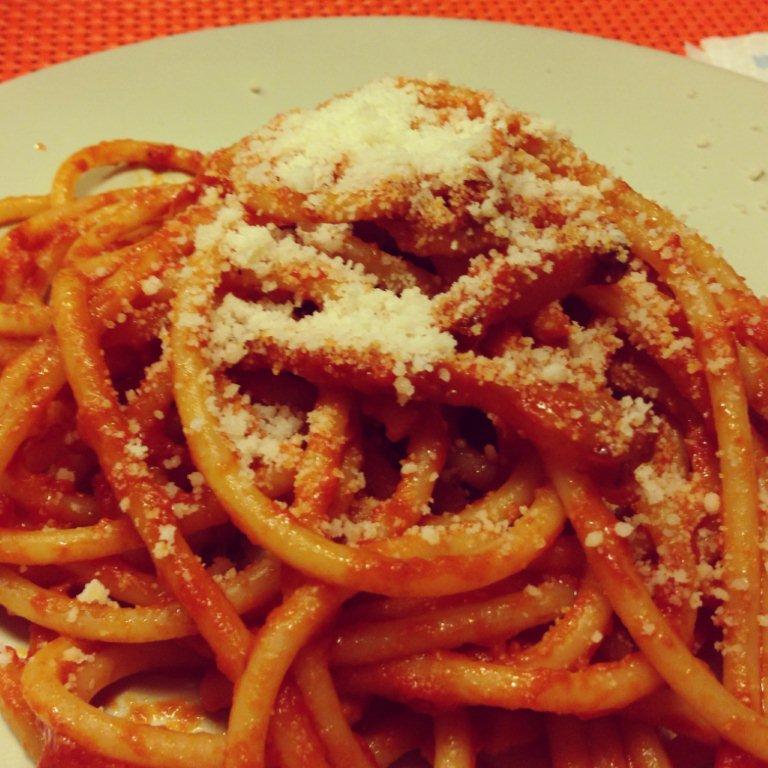 The true birthplace of amatriciana is said to be the small city of Amatrice, hence its name. Or so the Amatriciani people say. Located 100 miles from Rome this tiny mountain town takes a very purist approach to their sauce: tomatoes and guanciale are all that is needed. Romans, however, insist the dish originated in their city and say its true name isn’t amatriciana but “matriciano.” Their sauce instead includes a healthy serving of pecorino, guanciale, chili pepper, and onions.

Like many other dishes in Italian cuisine, oxtail is part of “la cucina povera,” or cuisine of the poor, an approach to cooking that consisted of utilizing what ingredients were the cheapest as well as a good deal of creativity. In other words, the rich took the best cuts of meat and the poor were given the leftovers. Offal, or parts of the animal that were generally considered less desirable were commonly included and tough, stringy oxtail was one of them. Nonetheless, the peasants were able to coax a rich, tender flavor out of their oxtail by letting it slowly cook and braise. Ironically, this dish is now one of the pricier ones on Roman menus.

While it’s considered a Roman classic, Saltimbocca (literally, “jump in your mouth”) actually originated in the northern town of Brescia, quite a distance from Rome. While it’s unclear when this secondo arrived in the Eternal City, Italian chef Pellegrino Altrusi published a gushing account of his meal at a Roman trattoria where he was served saltimbocca towards the end of the 19th century. He published the recipe in his cookbook, and the dish’s popularity has grown ever since.

Interested in learning more about food in Rome? Join one of our many walking tours in Rome‘s most historic neighborhoods.