Italy is legendary for its freshly made, locally sourced, utterly delectable cuisine. With nearly 3000 years of history as a capital city, Rome has had ample time to perfect the art of cooking. For your next trip to the Eternal City (or for those of us that prefer to do as the Romans do from the comfort of our own kitchen) here is a list of the top 10 typical Roman dishes that you won’t find at the Olive Garden. If you don’t know where to eat in Rome, then this top 10 list is for you! 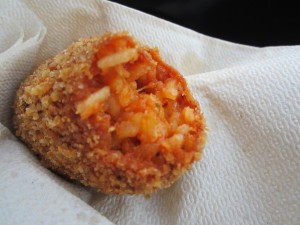 This bite-size snack is filled with mozzarella cheese surrounded by a mixture of risotto, egg and tomato sauce, which is then coated in breadcrumbs and deep-fried.

The newly launched 00100 Pizza has more than 18 different flavors, great for the connoisseur and the newbie. Via Giovanni Branca 88 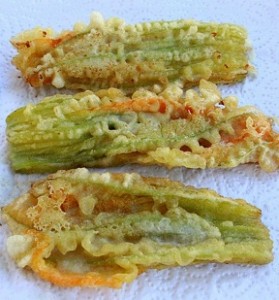 Simply put, these are zucchini blossoms. Romans have their own unique method of preparation; the blossoms are stuffed with a strip of mozzarella and one thin anchovy. Then the whole thing is battered and fried.

Zucchini flowers come in two varieties: male and female. You can tell the difference by looking at where on the plant the blossom starts. Females grow directly off the end of the zucchini, while males grow from the stem. No need to pay too close attention, as both are edible.

Start your meal at Al Pompiere with a plate of fiori di zucca, or make it your entrée with a double portion. Via Di S. Maria De’ Calderari, 38 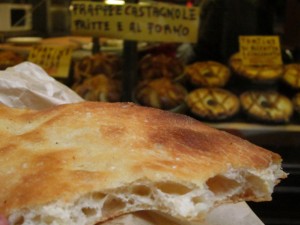 For those whose favorite part of the pizza is the crust, pizza bianca is a gift from heaven. Served “al taglio” (by the slice) the flatbread is topped solely with olive oil and a sprinkling of salt.

Unlike the round thin-crust pizzas served at restaurants, pizza al taglio is thick and rectangular. Customers indicate what size slice they want which is then weighed, folded in half and wrapped up for take-away.

Forno Campo de’ Fiori is one of the most trafficked bakeries in the city, and pizza bianca is their specialty. Campo De’ Fiori, 22

There are many myths as to the origin of the name “Carbonara,” which is derived from the Italian word for charcoal. One account is that the dish began as a filling meal for coalminers. Another legend says that it was originally prepared over charcoal grills. A far more thrilling rumor credits an Italian secret society, the “Carbonari,” with its invention.

Countless tour guides point out La Carbonara in Campo de’ Fiori as the originators of the dish, but the restaurant itself claims no such title. Nevertheless, their pasta is mouth watering. Piazza Campo de’ Fiori, 23 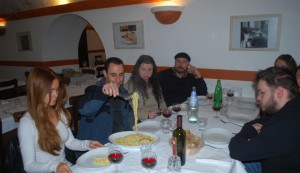 When cooking Cacio e Pepe, black pepper out of your normal shaker just won’t do. For the spicy, flavorful taste that the dish deserves freshly ground peppercorn is a must.

Anthony Bourdain went crazy for this dish when he visited the locals only restaurant Roma Sparita on his show “No Reservations.” Piazza di Santa Cecilia, 24 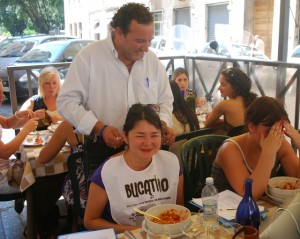 For a pasta dish with a little zest, try bucatini alla’amatriciana. The spicy tomato sauce made of red chili peppers, guanciale (cured pork jowl), and pecorino cheese will have you asking for seconds and thirds.

This dish originated in a tiny mountain town called Amatrice, about 100 miles from Rome. As with everything else, the Romans made it their own by adding onions, garlic, white wine, basil and sage.

For a gourmet experience dine at Roscioli. The attached bakery is also one of the best in Rome. Via dei Giubbonari 21-22 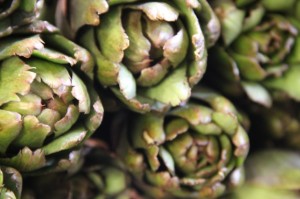 Artichokes are so popular in Rome that there are not one, but two traditional methods of preparation. In the first, “Carciofi alla Romana,” the artichokes are slowly cooked in olive oil until they soft. In “Carciofi alla Giudia,” the Jewish method, they are deep fried twice until the leaves become brown and crispy.

Although artichokes are native to the Mediterranean area, most are now grown in Italy. The country is responsible for almost 2/3 of the world’s artichoke production.

Nothing beats the Jewish Ghetto for carciofi alla giudia. Piperno, opened more than 150 years ago, is a favorite. Monte de Cenci, 9 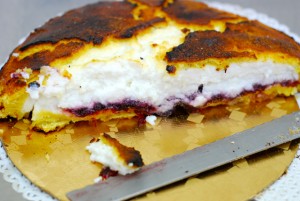 This dessert dates all the way back to antiquity. Ancient Romans would mix honey with their sheep’s milk ricotta to satisfy their sweet tooth.

Pasticceria “Boccione” Limentani was featured in the New York Times for their delicious baked goods. Via Portico D’Ottavia, 1 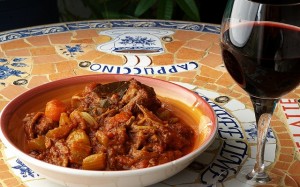 For meat lovers only, the oxtail in this traditional stew is cooked for four hours until it becomes delectably tender.

Before World War II, slaughterhouses would pay their employees with unwanted scraps of the oxen. Families had to get creative with their cooking, which resulted in some of the most savory dishes in Rome.

It’s a permanent fixture on the menu of Checchino dal 1887 in Testaccio. Via di Monte Testaccio, 30 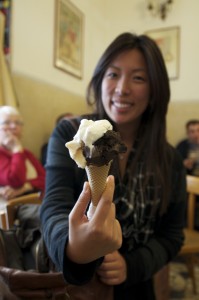 Legend has it that ancient Romans made the first gelato by adding fruit to snow from the mountains. It has evolved a great deal since then, and is now made mostly from milk, sugar, and other natural flavorings like fruit, nuts or chocolate.

Giolitti has been making authentic gelato since 1890. Via degli Uffici del Vicario, 40

text for photo credits:
photos in this post by FrancescaV.com

Want to test a few of these on your next trip to Rome? Be sure to check out our daytime food tours in Rome – Trastevere Street Eats and Taste of Testaccio to try some of these and more!