Florence is an exciting city all year round with classic street parades, contemporary art shows and fashion events to satisfy all tastes. It’s a heady mix of old and new. But when is best to visit? That depends on your time of visit and interests. Below are some of our favorite times of year in Florence…

8 of the Best Reasons to Visit Florence Throughout the Year

January 6 for the Epiphany

“Cavalcade of the Three Kings” commemorates the arrival of the Three Kings in Bethlehem. An ancient parade has been performed in the city since 1417 celebrating the arrival of the three kings to the manger where Jesus was born. The parade starts by Palazzo Pitti and winds its way through Florence’s ancient streets with a colorful procession in Renaissance costumes. January 6 is also a public holiday in Italy so many shops and offices are closed; yet the city is alive with pomp and ceremony all afternoon.

The Renaissance capital has its own New Year that is celebrated 9 months before the birth of Christ, with the traditional Florentine New Year on the feast of the Annunciation – when the Angel Gabriel told Mary that she would be the mother of Christ. The day begins with a morning parade throughout the historic center with performers in elaborate dress starting from Piazza della Signoria by Palazzo Vecchio. The day continues at the Piazza SS Annunziata where locals and visitors enjoy an outdoor food market (9 am – 5 pm) and a music show (9 pm).

Easter for the Scoppio del Carro

Easter is undoubtedly the biggest holiday in the Christian calendar. Each year, Florence hosts Scoppio del Carro, an explosive spectacle in Piazza Duomo at 11 am on Easter Sunday. Its origins date back 1,000 years to the First Crusade, and since the 15th century, a richly decorated cart travels through the streets of Florence on Easter Sunday pulled by white oxen en route from Porta al Prato to Piazza Duomo. Once it arrives, a wire is run from the choir of the cathedral and fixed to the center of the cart when, post-mass, a dove-shaped rocket, colombina, is released inside the cathedral racing along the wire, leaving a trail of smoke along the length of the church nave, before setting the cart alight on impact with a cluster of fire crackers and hundreds of multicolored fireworks exploding to symbolize the next year’s harvest.

May for Maggio Musicale

Italy is renowned for its passion for music and dedication to opera; it’s said the first opera was performed in the city in 1600 at the wedding of Henry IV of France and Marie de Medici at Pitti Palace. Maggio Musicale Fiorentino, one of the oldest and most important music festivals in Europe, was founded in Florence in April 1933, and every year during the month of May, a number of shows are performed in theatres throughout Florence, including at the new state-of-the-art opera house, Teatro dell’Opera di Firenze, with music concerts, recitals and special performances, many within the strikingly contemporary theater complex which opened in 2012.

June 24 is an important day in the Florentine calendar. Not only is this the day the city celebrates it patron saint, St. Giovanni (St. John); it is also the final of the infamous, and frantic, game of historic soccer, Calcio Storico. A mix of rugby, soccer and boxing, Calcio Storico is very much a contact sport played between the 4 quartiers of the city. The final takes place at 5 pm on 24 June in Piazza Santa Croce before the winning team takes to the city streets in celebration. To celebrate St. John, the city sets off a fireworks display at 10 pm from Ponte Vecchio, with the best views to be found from up high from the vantage point of Piazzale Michelangelo.

This bi-annual fashion spectacle take place in June and January when the city is inundated with a huge number of fashion industry movers and shakers from around the world keen to see the latest collections in menswear being showcased in the city. The fashion shows are ticketed and for fashion industry members; however, Florence plays host to a huge amount of events open to the public with pop-up shops, bars and street parties taking place all week, making Florence even more alive than normal.

Truffles are considered a prized product in Italy, with late fall an optimum time to find and devour this delectable food item. In the town of San Miniato, 30 minutes west of Florence, the Mostra Mercato del Tartufo Bianco di San Miniato, festival of white truffles, takes place with hundreds of stalls lining the streets of this quaint hill-top town offering free taste samples, items on sale to buy to take home, and wine tasting to be enjoyed by the glass while wandering the streets in a truffle haze. On over the last 3 weekends in November, it’s definitely a festival for foodies not to miss.

December for the Christmas lights

There is something serene and magical about the twinkle of soft white lights around European cities in December. And Florence doesn’t disappoint at this time of year. Her narrow cobbled streets and elegant palaces reflect the lights, which brighten the nighttime streets creating a wondrous winter wonderland to explore. In Piazza Santa Croce, the annual Christmas markets are held, inspired by a traditional German style, with wooden stalls erected throughout the piazza selling Christmas trinkets, serving bratwurst sausages and hot mulled wine during the first 3 weeks of December. 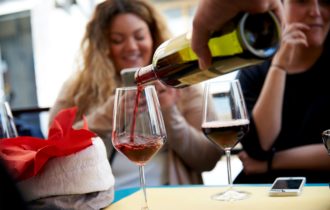 Nardia is a Florence-based writer passionate about travel, food, wine and authentic experiences with Italy’s lifestyle and culture, “la dolce vita”, her daily inspiration. When not eating and drinking around Italy, she is writing for her website, Lost in Florence, a city guide to the less traveled venues in Italy’s Renaissance capital. You can find more of her insights via lostinflorence.it and connect via Instagram, Twitter, and Facebook.

Meet Gaia Ancilotti, our erudite and entertaining City Head in Florence, Italy. Born and raised in the Tuscan countryside, but felt the calling of the “big c...

Italy is crowded with beautiful places. The countryside varies so much from north to south. The seaside and the lakes. Its art and architecture, known around...