Seemingly far from the Trastevere busy with nightlife is quiet Via del Luce. Walk through it in the morning and you’ll get an idea of how Trastevere used to be. A stray cat stops to lick its fur, and an old woman in a flower-patterned housedress shouts to a man across the road. In the middle of this residential slumber is Biscottificio Innocenti, a cookie shop that also has the power to send you back in time. The shop front is all windows with frame painted a faded cornflower blue. It’s obvious at once that there’s nothing complicated here, that cookies are simply cookies.

These cookies, loaded into the Biscottificio’s tall street-facing windows, will stop you in the center of Via del Luce and draw you into the shop. Inside, the stark white-enamelled walls emphasise the open space and make the oven seem not so big. But the oven is massive and the focal point of the place. It’s a rusty, vintage orange color and like no oven I’ve ever seen. Stefania, who inherited Biscottificio from her parents, tells me that the oven is from the 1950s. Once she called the company in Milan for varnish only to find it had closed.

The oven is one of the secrets to the taste and texture of the Biscottificio’s cookies. The cookies are loaded onto the belt that runs 16 meters long, ensuring an even baking temperature. Their consistency comes near perfection: their sweetness crumbles in your mouth. But more than the oven, the generations of Stefania’ family, who have preserved the traditions, make the cookies taste so good. Stefania doesn’t even remember a time when she started working at her family’s business. She says she began when she was born because as a baby her mom brought her into the shop to keep an eye on her as she worked. 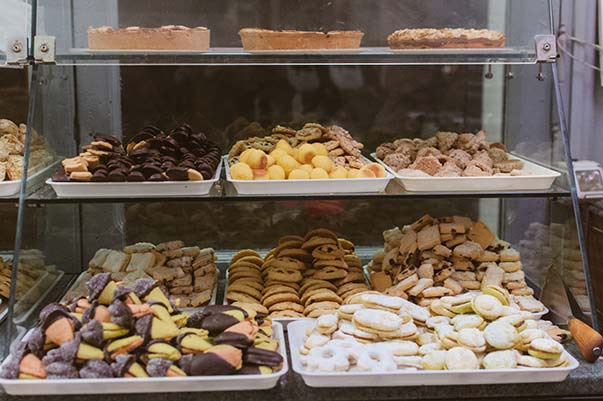 In 1920 Sesto founded the Biscottificio Innocenti, which was then passed on to his son Enzo, who paired with his wife Anna, and then it was passed on to Stefania, who is now assisted by her daughter Michela. The responsibilities of running a family business are mitigated for Stefania by the fact that the Biscottificio Innocenti is the only bakery of its kind in Trastevere and the knowledge that she’s continuing the tradition began by her grandpa. She takes pride in doing what no one else is doing, and her customers readily support her—especially when she bakes such good sweets.

The biscotti (the general word for cookies in Italian) that most customers come for are brutti ma buoni (literally “ugly but good”). They are little brown pyramids of crispy and soft deliciousness. Other biscotti that fill the cases are covered in chocolate, filled with jam, and rolled in almonds. The Biscottificio also makes crostate (large tarts filled with jam), and seasonal sweets like panettone at Christmas and frappe around Carnival.

Several of the recipes date back to Sesto’s time and have been modified by whoever’s in charge. Stefania laughs as she says, “If we don’t like one recipe or another, we just get rid of it and make something else instead.” Her face is framed by short hair, the perfect remedy for working near an oven during a Roman summer. Every morning the cookies are baked according to what is needed and if a holiday calls for a special treat. In the afternoon Michela arrives, and Stefania takes a break.

“Not many people understand the seriousness of the work,” Stefania says. She’s referring to the idea that baking cookies and running a family business can sometimes be seen as a lighthearted task, as a way to fill the hours till the end of the day. But the existence of Biscottificio Innocenti proves just the opposite. It proves that a cookie shop can require the dedication of lifetimes, not only to the product and customers but also to an idea born one-hundred years ago. Unlike so many of us, Stefania’s passion for her job began when she was a baby smelling the sugar as it was emptied into the mixer. It is a passion she carries on today that she is passing down to her daughter and to her customers through her great cookies.

Contact [email protected] with Blog Enquiry in the subject title for any feedback or requests for a topic you want us to cover. Voted one of the best things to do in Rome, Eating Italy Food Tours offer a Rome food tour through one of Rome’s oldest and most characteristic neighborhoods.

5 of the Best Food Factory Tours in London