The Christmas period is one of the most magical times of the year to visit Italy. Ancient monuments and architectural masterpieces are adorned with twinkling lights and the smell of roasting chestnuts permeates the air. Traditional Christmas markets take place throughout the country and are the perfect places to pick up unique gifts and local delicacies. We’ve picked out some of the best for you:

Piazza Navona provides the stunning Baroque backdrop to Rome’s annual Christmas market as Bernini’s Four River Fountain becomes encircled with a lively combination of stalls, musicians and street entertainers as well as a picturesque carousel. The historic event has been taking place for over 100 years and still welcomes local craftsmen who carry on their family traditions by selling handmade crafts, puppets and decorations. The event culminates on Epiphany with the arrival of the legendary Befana, a witch bringing sweets to children who are well-behaved, and coal to those who are not. 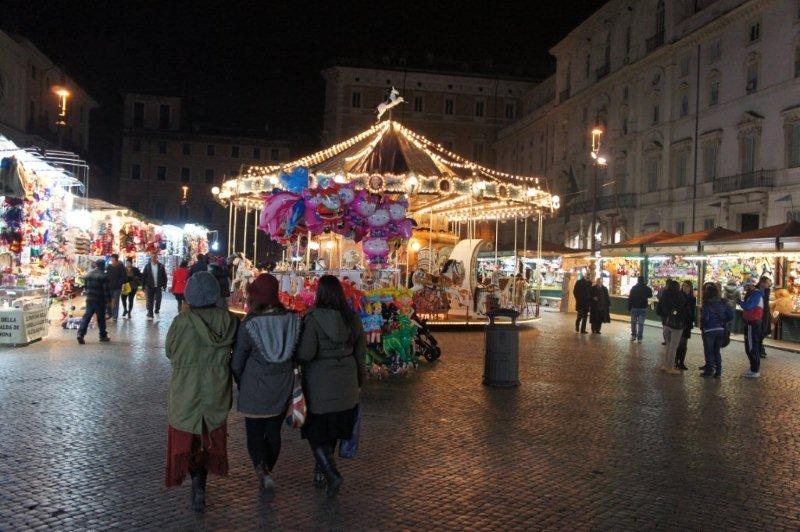 Every year Piazza Santa Croce in Florence is filled with pretty wooden stalls when a traditional German Christmas market, or Weinachtsmarkt, transfers to the city from Heidelberg. While browsing a wide selection of ceramics, ornaments, toys and gifts you can also sample some traditional German food or sup some warming Glühwein (mulled wine).

Coinciding with the celebration of Milan’s patron saint, St Ambrose, on the 7th December, the annual festival of Oh bej! Oh bej! is one of the oldest traditions in the city. The origins of the fair date back to 1510 when delegate of Pope Pius IV, Giannetto Castiglione, arrived in the city carrying gifts for the Milanese children in order to ingratiate himself with the locals. The name Oh bej! Oh bej! refers to the happy exclamations as the presents were opened. Nowadays the historic celebration consists of a Christmas market held around the imposing Castello Sforzesco with over 350 stalls selling a variety of crafts, food, books and toys.

Each year the elegant Piazza dei Signori in the heart of the romantic city of Romeo and Juliet hosts the Nuremberg Christmas market or ‘Christkindlmarkt’ creating an atmospheric blend of both Bavarian and Italian festive traditions. The picturesque wooden stalls sell an enticing mix of wooden, glass and ceramic crafts, gifts and decorations while German delicacies such as stollen, bratwurst and lebkuchen cookies will ensure that you don’t go hungry.

Although not strictly a seasonal celebration, no list of Christmas markets would be complete without mentioning the famous presepi (nativity scenes) of Naples. The narrow street of Via San Gregorio Armeno in the district of Spaccanapoli is overflowing with workshops selling handmade nativity figurines, made traditionally from terracotta, depicting everyone from biblical characters to caricatures of famous Italian stars and politicians. The shops are open year round but the lead-up to Christmas is the most evocative time to visit with many vendors dressing up in traditional shepherd costumes.

Christmas Traditions in Rome and Italy